How to make Bomboloni, Donuts of Tuscany

Bomboloni Donuts! Even in Italy, we have a version of the American Donuts. In Tuscany, we call them Bomboloni. Honestly, I only knew them with the Tuscan name before Homer Simpson made donuts so popular in Italy.

When I think about Bomboloni and donuts my mind goes back immediately to the summers of the ’80s and ’90s when I was a kid. I used to spend the whole summer at the beach of Versilia and Apuan Coast with my mother and my two sisters. Sometimes, if we were strangely good, or if our mamma just forgot our Merenda snacks, we could get a Bombolone.

Bomboloni in our childhood

At that time, as today, the owners of the bath establishments used to prepare warm Bomboloni sprinkled with sugar in the afternoon. You could hear the announcement via the microphone informing guests that Bomboloni donuts were ready at the bar. “Sono pronti i bomboloni!” they said.

Also, you could find peddlers selling Bomboloni on the beaches. They shouted “Bomboloni! Bomboloni caldi!” (Bomboloni! Hot Bomboloni!). In both cases, all kids, like in the fairytale Pied Piper of Hamelin, were running to buy at least one. Coming back to their mothers with their faces and hands full of sugar icing.

Other places where it is common seeing bomboloni donuts are local fairs or funfairs. You can buy one from food trucks but for me, they taste too much different. I miss something… the scent of sea salt on them. Even if time pass, my memories go to my childhood, and the connection between Bomboloni and the beach, is still really strong.

What are Bomboloni, the Tuscan donuts?

If the United States has donuts and Austria has Krapfen, Tuscany has Bomboloni.

The recipe arrived in Tuscany from Austria during the XVIII century when the House of Habsburg-Lorraine guided the Grand Duchy of Tuscany. Then the delicious Bomboloni became popular even in other regions of Italy like Emilia Romagna.

The bombolone is a fluffy fried dough, round in shape and covered with sugar.

We usually eat it, warm or cold, for breakfast or in the afternoon as a snack. Never as dessert after lunch or dinner.

What makes the difference between Bomboloni of the Tuscan traditions and the ones from other regions of Italy is the process of making.

The dough is softer and has a thin texture. While the krapfen, the American donut, or the Bomba from Lazio have a thicker texture. We use less butter and fry in oil at a lower temperature. It makes them less heavy to eat. The original recipe does not have eggs but today we give you a version of an Italian Nonna that includes one egg in the dough.

The original Tuscan bombolone is empty. However, there is also a version with cream inside, popular, especially in the south of the region, where they fill it with cream.

Bombolone also has a version with a hole in the middle. In this case, they better look like classic American donuts.

In the area of Versilia and Carrara (northern Tuscany) where I am from, no matter which shape they have, we call them Bomboloni.

If you go south in the Livorno area, they call Bomboloni only the version stuffed with custard or Nutella. The version with the hole in the middle is known as Frate, literally a friar. What a funny name! And how strange is to give different names to the same things in places that are less than 100 km away from each other!

The recipe of Bomboloni

To get this recipe, I asked my grandmother for her bomboloni donuts version. She gave me the one she inherited from her dear friend and colleague Bice. During the summer season, Ms. Bice used to prepare and sell their handmade Bomboloni. My grandma desired to honor her memory making me promise to mention her in this recipe. So I did. 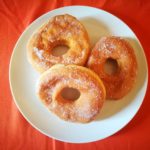 Bomboloni, the Donuts of Tuscany

Gianna Nannini is an Italian singer that was really popular from the end of the ’70s until the ’90s all over Europe. In 1996 she composed and performed a song called Bomboloni. A distorted sound of guitars and a raspy voice for a non-sense text where she mentions donuts, hammers, and real bombs to explode and build a new warm world. Should I mention that she is from Siena as well? Below are the video and the lyrics, both in Italian and English, for those interested in understanding what she sings about.

Here is the English version: