Necci are kind of crepes made with chestnut flour typical of northern Tuscany. We love it for its tastiness and simplicity. It is crazy how starting from a couple of simple ingredients you can make such a lovely dessert. Follow this super easy recipe to make your own chestnut flour crepes at home.

Necci: a dish of the Tuscan Cucina Povera

Chestnut’s Necci are an example of the Tuscan Cucina Povera, the cuisine from those hard times of the past when families survived with very little money and little food. Chestnuts were widespread in the woods in the mountainous areas of Tuscany. Women of the family used to prepare many dishes with chestnuts or chestnut flour. They were cheap and full of energetic and nutritious properties.

The Original way to make Necci

Traditionally, locals cook the Chestnut Neccio in the Testi, two iron plates with a long handle. First, they heat both plates on the fire and slightly greased them. Once warmed, they pour the chestnut mixture on one of the two hot plates, while the other is placed above. So they could cook the Neccio on both sides. Here a video where you can see an example of how people prepared Chestnut Necci in the past.

Only a few people today have Testi at home. So you can easily make your own Necci using a normal skillet. The recipe is super easy and quick.

How to eat Chestnut Flour Crepes

You can eat plain Necci, but they become mouthwatering with a filling like ricotta cheese. Gluttons fill these Chestnut Flour Crepes filled with Nutella instead of ricotta. If you are a super glutton you can use both. Another tasty variant is with honey and sheep ricotta cheese.

If you travel around Tuscany in autumn or winter you can easily find Necci as dessert at the restaurant or as street food during the Sagre, the traditional Italian festivals dedicated to a local dish or ingredient.

In my family, we prepared Necci during Christmas time, especially for Befana’s Eve on the fifth of January. But it was also a tradition to prepare them on December 13, to celebrate Saint Lucy. Just like Santa Claus or the Befana, tales say that she brought gifts to the good kids.

The member in charge to prepare Necci was my grandfather Almo, father of my father. He was silently cooking the Chestnut flour crepes while I and my cousins were all around him. All together we stared at him cooking, having fun looking at his aquiline nose, and making jokes about that.

Chestnut flour crepes are so delicious that even the popular Martha Stewart published a recipe for the Necci on her blog. Without lessen her, or chef Mario Batali that gave her the recipe, the recipe without eggs is the original one.

If you love chestnuts, there is another cake of the Tuscan tradition you definitely have to prepare: the Castagnaccio.

But first, follow the recipe below to make your homemade Necci, the delicious Chestnut flour crepes from Tuscany. 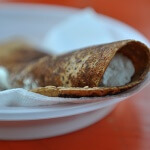 Pin It for Later!

10 thoughts on “How to make Necci, Tuscan Chestnut Flour Crepes”