The rice pie is a typical dessert of the villages upstream of my city, Carrara, in northern Tuscany. There is a great struggle between the inhabitants to get the paternity of the rice pie recipe, and each family has its own recipe.

Some say that it comes from the village of Codena, someone supports that is originally from Bedizzano, some others assume that was born in Torano, where women also spread the parmesan cheese on the surface of the cake. In Marina di Carrara it is typical to prepare this dessert for March 19, in occasion of the patron saint’s feast, St. Joseph.

When I was little, I remember seeing all the women in my family preparing countless and huge cake tins with the rice cake. My mother told me that when she was little, the cake tins of her mother, were so large that they were unable to get into the ovens. They needed to bake them in the ovens of the bakeries, along with the bread, and so it was for many other families.

For this recipe I used the anise liqueur, but many recipes include a secret mix of liqueurs in varying amounts, which may include brandy, cognac, liquor mint (or a peppermint), Alchermes, Sambuca, Sassolino or Maraschino.

Personally I prefer the typical recipe of Avenza, a hamlet of Carrara, and I prefer the rice pie baked in a wood oven. But, of course, it’s not easy for anyone doing it with the old style.

I invite you to try this “easy to make” rice pie recipe, I’m curious to know what mix of liquor you’ve used! 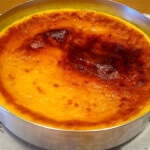 To grease the cake tin

We suggest you to taste the rice pie with sweet wines as Moscato or Brachetto wine.