The Castagnaccio is a simple and delicious dessert of the Tuscan tradition. The main ingredients of this chestnut cake recipe are water and chestnut flour. It is a typical dish of the autumn in Tuscany. Its rural origins date back in the past, when was a poor dish widespread in the mountainous areas of the Apennines, rich of chestnuts.

A bit of history of this chestnut cake recipe called Castagnaccio

Chestnuts were the staple food for tuscan peasants and on the nineteenth century the Castagnaccio spread to the whole Italy. After the Second World War, the “poor” cuisine dishes as Castagnaccio lost its importance due to the improvement of the condition for life and to a more refined cuisine. Recently it has been revalued and you can find it in many local festivals and Sagre.

The chestnut cake recipe is traditional in Liguria, Piedmont and Emilia Romagna too. According to what written by Ortensio Landi (1553) in the “Commentario delle più notabili et mostruose cose d’Italia e di altri luoghi“, the creator of the first Castagnaccio seems to be someone called Pilade from Lucca.

Ingredients of the chestnut cake recipe

Castagnaccio reminds me to my youth. During the fall season my family and I used to spend the weekend at our country side house, set in the middle of the chestnut trees forest, and Castagnaccio was the favourite dessert prepared by my grandmother.

The Castagnaccio is a very easy-to-make chestnut cake recipe. Nowadays the original recipe is enriched with dried fruits and nuts, to give Castagnaccio a more intense taste.

The chestnut cake is very cheap and nutrient. Pine nuts are rich of protein, calcium and vitamin A. And you do not need to add any sugar because you find it in the chestnut flour and raisins.

A romantic legend says that rosemary used to perfume the Castagnaccio, is a powerful love elixir. Eating the cake you should fall in love with the person who prepared it asking him/her to marry you.

What are you waiting for? Don’t waste time and prepare the Castagnaccio following this chestnut cake recipe. 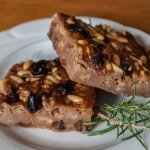 There are some variation you can make at the original recipe: for example cutting small pieces of apple into the dough, using milk instead of water or half water and half milk.

It can be served as dessert with ricotta cheese and paired with Novello wine or a sweet wine.