The Colomba Pasquale recipe is a precious content to bring one of the Italian traditions in your house during Easter, to share with your beloved relatives and friends.

I perfectly know that Colomba Pasquale is not a Tuscan dessert. Colomba is part of the Italian Easter Traditions. But if you are visiting Tuscany during Easter time, you will see Colomba everywhere. In the shop window of bakeries, groceries, and served in some restaurants. And for sure on the table of every Italian family.

But what is a Colomba Pasquale? Literally, it means “ Easter Dove”. It takes the name from its shape that has been given for the relation with Easter celebrations. It is a really popular dessert of Italian tradition. Have you already heard about Panettone? Well, Colomba Pasquale is the Easter sister of it, almost!

If you like Colomba, as long as you are in Italy, you can have as much as you want. But when you are back home? It is not so common finding this cake abroad. Maybe, you will find Colomba in some shops that sell Italian goods. My suggestion is to avoid commercial versions. Mostly because of their artificial taste. And, as you already know, they are full of preservatives.

Instead, if you already tried the dessert, or your Italian ancestors told about it, you should try to bake it. This Colomba Pasquale recipe is written to permit you to prepare your homemade Colomba. I know, it is a calorie bomb (478 kcal), but a slice of Colomba every Easter won’t be that bad.

The origins of the Colomba Pasquale

The legend of King Alboino

This legend of this dessert dates back to the high Middle Age in Lombardy (northern Italian region). This is what Motta, a famous Italian brand, said. They have high regard for having made so popular the Colomba Pasquale in Italy.

The story talks about King Alboino. During the 572 B.C, after three years of siege, he finally entered in Pavia the day before Easter. An old baker offered a strange dessert with a dove shape to the King. He wanted to calm down the king’s anger, explaining that his tribute was a symbol of peace during Easter. The dessert was smelling of honey and oven. It was so good and inviting, that the King agreed with a promise of peace.

The legend of Queen Teodolinda and the Irish Abbot

Another legend says the Colomba Pasquale is related to the Longobard Queen Teodolinda and the Irish Saint abbot of St. Columbanus.

The abbot arrived in the city, around 612 B.C. The Lombard Kings invited him and his monks for a sumptuous lunch. Despite all the game dishes of the banquet, Saint Columbanus and his monks rejected those rich meats. It was on Friday, and a time of penance, such as that of Lent.

The Queen Teodolinda got offended not understanding the reason for the refusal. The abbot passed to diplomacy to solve this unfortunate situation. Saying that they would have eaten meat only after they have been blessed. The abbey raised his right hand in a sign of the cross transforming all the dishes in white bread doves. White as their monastic robes.

The prodigy impressed the Queen so much that she decided to include the abbot’s sanctity. She also donated to the monks the land of Bobbio, the birthplace of the Bobbio Abbey. The white dove is also the iconographic symbol of the Saint and is always depicted on his shoulder.

It was during the ’30s that Angelo Motta, a baker from Milan, had the idea of making Colomba the cake that everyone should have consumed during Easter. He started using an old recipe for the dessert.

The baker was already making another dessert of the Christmas tradition, the “Panettone”.

He used the same machinery, and a similar recipe to create the new dessert. Then, he sent a sample to famous writers and journalists, to get their impressions on the dessert.

The Colomba Pasquale had an enormous success. Year by year, it became part of the Italian traditions, as a sign of peace and spring.

Pin It for Later!! 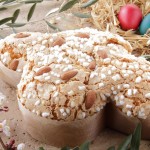 Don't you have a mold for Colomba Pasquale? No problem! Vittorio, an Italian living in California, made a video where he shows how to prepare your homemade mold. Even if he speaks a little Italian, you can just observe him and reply to his actions.

I would be glad if you could share with us your impressions of this dessert, once you have done your own homemade. You can leave a comment in the space below this article.