The chickpea flatbread is a tasty traditional street food of Tuscany and Liguria. It is a sort of very thin pancake, about 0,5 cm wide, soft inside but with a crunchy crust. We make it with simple ingredients as chickpea flour, water, salt, and extra virgin olive oil.

In Tuscany, we use to call it with different names depending on where you are. In Pisa and Versilia they call it “Cecìna”. Leghorn and province know it as “torta di Ceci” or more simply “torta“. In Carrara, they call it “Calda Calda“, literally “hot hot”. In Lunigiana, Garfagnana, and Liguria you have to ask for “farinata di ceci” or “farinata“.

What the chickpea flatbread is?

I tell you a story to explain that. A few years ago my friend Jed from San Francisco came to visit me in Tuscany. After a few days exploring the best places, it was time to let him experience the taste of the chickpea pie.

We went to a pizzeria to order the chickpea flatbread. I asked Jed to guess what was this delicious specialty. He thought it was an omelet and this made me laugh. The owner of the pizzeria, an old woman who saw me grow up, asked me: “Why are you laughing?”. I told her what my friend Jed thought about the chickpea flatbread, and she started to laugh too.

She replied to him: “No my dear, this is CALDA CALDA!” associating the typical Italian hand gesture that means “eating”. My friend, of course, did not understand. But he was delighted to get some slices asking me what was that.

The chickpea flatbread has a round shape and is baked in a wood-fired oven. The best is using a special copper pan. Once cooked it assumes a bright golden color. Some food companies sell a pre-cooked version, ready to heat, but of course, it is not the same thing as preparing by you.

According to one of many popular recipes, you have to dilute 1/4 part of chickpea flour with 3/4 parts of water in a bowl. Add salt and stir vigorously to dissolve the lumps of flour. Possibly crushing them against the sides of the bowl with the spoon.

Before to bake, allow the mixture to stand for a few hours (from two to ten hours and even more). Stir it occasionally to prevent the settling of the flour and to dissolve the residual lumps.

The Chickpea flatbread in a legend

The chickpea flatbread has very ancient roots. Various recipes of Latin and Greek origins included pies with mashed legumes cooked in the oven.

Anyway, a legend says that the chickpea flatbread was born by chance in 1284. The republic of Genoa defeated Pisa in the naval combat of the Meloria, a small rock in front of the Tuscan coast. A Genoese ship, carrying prisoners, suffered damages caused by a storm. In the hustle and bustle, some olive oil barrels and sacks of chickpeas toppled, soaking into the saltwater previously entered the galley.

Due to the storm and to the hard battle, the food was running low. So the captain of the ship ordered to retrieve the cans and to serve the crew a bowl of that shapeless chickpea purée with olive oil. Some sailors refused to eat that mush leaving the bowl in the sun. With time, the mixture dried out originating the first chickpea flatbread in the history. The next days, driven by hunger pangs, the sailors ate the leftovers finding it so delicious.

Once back on land, the Genoese decided to improve the unexpected discovery. They baked the chickpea purée in the oven. The result pleased them very much, and to mock the defeated of the enemy, they called the chickpea crust “the gold of Pisa“.

As you heard in this legend the Farinata born in Genoa in Liguria. Moreover, this food became popular also along the coast of Tuscany, especially in the Pisan cuisine. In fact, Pisa requested the DOP designation of origin for this product.

How to taste the chickpea pie

There are different ways to taste the chickpea flatbread. Served simply on a dish, inside a small loaf of bread called “francesino”, or in rounded small focaccia. Usually, a sprinkling of black pepper on top is perfect.

In the first half of the 20th century in Leghorn, they start to use the expression Cinque e Cinque (five and five). It comes from the combination of bread and farinata. People used to go to the bakery asking for 5 Lire of bread and 5 Lire of Torta. (Lira was the currency of Italy before the introduction of the Euro).

In Leghorn and throughout the province, Cinque e Cinque is very popular. You still find many tortai on the street (torta sellers, ancestors of the modern Pizza By The Slice). Usually, locals order the stuffed sandwich together with a glass of a gold-colored soda called “Spuma”.

Moreover, there are many variations of Farinata. You can find it with the addition of soft cheese, leeks with blue cheese, or with eggplants.

Farinata is famous abroad too

Nicola recently went to Argentina and he got the local version of chickpea flatbread, called fainà. It is thicker than the Italian version and they stuff it with cheese. No matter where you are, it is always delicious.

Pin the recipe for later! 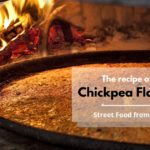